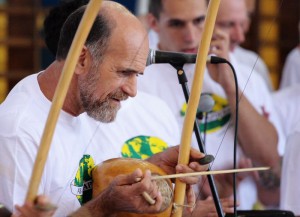 The group ABADÁ was founded by Mestre Camisa (Jose Tadeu Carneiro Cardoso). Mestre Camisa and his brother  Grão Mestre Camisa Roxa (Edvaldo Carneiro e Silva) were students of Mestre Bimba. ABADÁ is a non-profit organization and its purpose is to teach Brazilian culture and Capoeira to preserve values and knowledge about its history. The group has meanwhile spread throughout the world and is always striving to develop and distribute the traditional Capoeira Angola, and the more contemporary Capoeira Regional, in a modern way to further increase its reputation. ABADÁ Capoeira has groups in at least 27 federal states of Brazil and at least 35 countries throughout the world. ABADÁ Capoeira follows the philosophy of development on several layers including the pursuit of technical and theoretical mastership of the student and the group. Within this context, Capoeira is a valuable social, artistic, educational, psychological and cultural means to strengthen and develop both the individual and society. 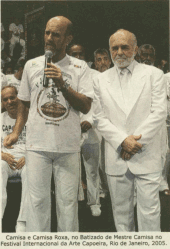 It is still relatively new to practice a form of Capoeira which connects and develops Capoeira Angola and Capoeira Regional. Here, the modern qualities of Mestre Bimba are followed without losing the guiding principles and values of Capoeira as a historic and philosophic art. Here, ABADÁ Capoeira takes a leading role in this venture and Camisa Roxa was a driving force to propagate the Brazilian art of Capoeira, Candomblé, Maculelê and Samba. During a tour with the folk-group Olodum Maré, Camisa came to Rio de Janeiro, where he decided to teach Capoeira in  1972. Camisa Roxa was on tour with shows in Argentina, Ecuador and Peru. Later, he traveled as founder of  Brazil Tropical to Europe and was the coordinator of ABADÁ Capoeira. Finally, he contributed to the propagation of Capoeira worldwide.

Based on the Capoeira Regional of Bimba,  Mestre Camisa developed new methods for ABADÁ Capoeira and founded, so to speak, his Capoeira family with Ceará, Capixaba, and also Linguado. Today there are approximately 35.000 members (Brazil, USA, Canada, Mexico, Israel, Germany, France, Sweden, The Netherlands, Belgium, Great Britain, South Africa, Russia and may more). The technique are perfected continuously and ABADÁ takes part in any form of development of this Brazilian national sport, from political discussion on integrating Capoeira into the scholar system to qualifying Capoeira for Olympic game standards. To promote the latter, ABADÁ Capoeira organizes World Championships in Rio de Janeiro, Championships in Europe and other continents as well as national championships in different countries.

Any cookies that may not be particularly necessary for the website to function and is used specifically to collect user personal data via analytics, ads, other embedded contents are termed as non-necessary cookies. It is mandatory to procure user consent prior to running these cookies on your website.