Mestre Bimba (Manoel dos Reis Machado) was born on November 23rd in 1899 in Salvador. At the age of 12, he started praticing Capoeira with an African called Betinho. He got in contact with other martial arts during his time in Rio de Janeiro in the thirties. 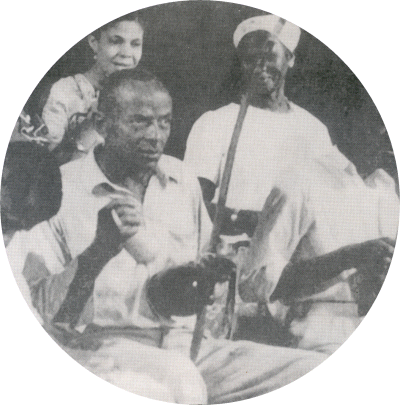 Mestre Bimba integrated foreign elements into the traditional Capoeira movements and hence created Capoeira Regional as a national sport for fighting and self-defense including technical quality levels and training sequences. He founded his Academia on Pelourinho in Salvador in 1932. The academia was acknowledged by the government and registered as sports school by the department of culture, health and education. Although he was allowed by General Jaracy Magalhaes to perform Capoeira officially as Brazilian dance and folklore, his work did not receive adequate attention during his lifetime. On February 15th 1974, Bimba died in Goiania, alone and disillusioned.

It is said that throughout Brazil people grieved for 7 days and no Capoeira was practiced. During Bimbas time, there were also other skilled Capoeristas, but none had equal technical and educational abilities, and above all equal charisma.